What follows are simple statements of reality, NOT what could be, because in the last few years there has been a paradigm shift in America away from a Republic to a full blown dictatorship with more power being consolidated into the hands of a single individual than any American would have ever believed! So please read, and I invite one and all to challenge yourselves to look around, see the changes, and ask yourself and others, WTF.

What follows is a list of rights and freedoms we can now, by law or by executive order, be denied in the land of the (used to be) free, and circumstances that prevail for the powers that be to enforce this madness. It is not an all-inclusive list, but enough to scare the crap out of any Americans wanting to know what the fuck happened while they were sleeping.

You now have lost your right to assembly through HR 374, giving government the ability to arrest and bring felony charges to anyone engaged in political protests anywhere in the USA! Passed by Congress!

You now have lost your right to free speech through HR 374, giving government the ability to arrest and bring felony charges to anyone engaged in verbal or written political protests anywhere in the USA! Passed by Congress!

The president no longer requires the Senate to approve his Tzars, and can appoint any crony or political ally to any high-ranking government office, with impunity from congressional checks and balances with the passage of S 679. This will allow him to consolidate powers not before even considered due to the relationships he may have with these appointed individuals! Passed By congress!

You no longer have the right to due process in any way, shape, or form if our president or his appointed government officials declare you an enemy of the state through the NDAA rider. There is no longer the requirement for the burden of proof, as you have no due process and can be locked away indefinitely, without the prospects of a trial. Passed by congress!

You can now be targeted for assassination, as an American, by the president or his appointed representatives if for any reason you are deemed an enemy of the state and there again is no burden of proof, and no requirement for due process! Passed by presidential executive order!

The president has made law his power to declare a national emergency, defined by him, and may take over all communications within in the USA, both public and private, for a period of time to be determined by him! Passed by presidential executive order!

The president made law his power to declare Martial law in an emergency, defined by him, with the ability to confiscate all properties, both public and private, including farms and livestock, and force citizens into labor to support this agenda! Passed by presidential executive order!

The government has bought, paid for and staffed over 800 internment centers, built under contract by Halliburton industries, strategically placed around the country, and capable of holding hundreds of thousands of Americans for forced reeducation and relocation purposes, without due process and for an indefinite period of time as detailed in DOD report FM 3-39.40.

Your right to reasonable privacy is gone as, through the patriot act, government agencies may spy on you and collect your personal data with legal impunity, whether it be through social media, phone conversations, internet searches, street lights or high flying drones! You will never be truly alone again in your life!

The government is actively hiring tens of thousands of goons and thugs from the dregs of society to man an internal army called by their soft names, the TSA and Homeland Security. These troops will be armed as well as the best combat troops we send abroad to fight our illegal, imperialistic wars, including battle-proven automatic weapons, hundreds of millions of .40 caliber hollow point rounds (only meant to kill), body armor, armored vehicles and, of course, aerial surveillance! They are currently being stationed across the country at strategic locations such as airports, train and bus stations, shopping malls, checkpoints on major highways and even sports events. So, basically, in any place there is significant gathering or the flow of population!

The Military is in the process of training as many as 40,000 returning soldiers in crowd control and riot termination to be used to augment the internal forces mentioned above, even though this is in direct violation of the constitution, which clearly states the standing army is to be used for foreign conflicts and not against the American people!

Now this list, as short as it is only shows the surface of the preparations being made to enslave and subjugate the American population. Are you fucking angry yet? Are you comfortable with the changes?

The struggle for liberty may cost you a lot, BUT, doing nothing WILL cost you EVERYTHING else you hold near and dear.

Please remember, as bleak as this seems, there is hope, because regardless of their power and preparation, the most powerful force in this country has always been and still remains the 321+ million Americans. Together we constitute an unstoppable force that cannot be silenced. But, you the individual has to want your Country back, until then, everyone remains fucked without lubrication.

While millions of Americans (myself included) continue to send back bigger portions of their hard earned wages to Washington, many federal employees are tax cheats and getting large tax refunds. During the year of sweeping budget cuts, millions of federal employees faced layoffs, furloughs, and other cutbacks as a result of Congress’ failure to replace sequestration with responsible, targeted cuts. Most of these federal employees are responsible citizens who pay their taxes. Some, however, don’t feel they have to live by the rules like other Americans.

In 2011, the IRS found nearly 312,000 federal employees and retirees were delinquent on their federal income taxes, owing a total of $3.5 billion in unpaid federal income taxes. This represented an 11.5 percent increase in the number of federal employees failing to pay their taxes, and a 2.9 percent increase in the total taxes owed the Treasury by these public servants. The 2011 figures, the most recent year for which data are available, include 107,658 civilian federal employees owing more than $1 billion in unpaid taxes; 141,980 were military and civilian retirees $2.1 billion in delinquent taxes; and 61,928 were current military with $329 million in outstanding taxes.

It is inappropriate for any individual in violation of the law, including tax law, to retain full time employment with the federal government. And yet, nearly every federal agency and office, starting with the White House, Congress, and even the Treasury Department, continue to employ individuals who are failing to pay their taxes. Congress, the Courts, and the White House have failed to lead by example, with the three entities employing a total of 1,622 individuals owing a combined $23.8 million in taxes as of 2011. Federal employees have a clear obligation, just as the rest of American citizens do, to pay their federal income taxes.

CNN’s list of what is closed and what is open

With the federal government now partially shut down, many government services and agencies are closed, suspended or otherwise impacted. CNN.com  has a list of offices and agencies that are affected until congressional leaders and the president reach an agreement on a continuing resolution to reopen the government, along with the potential number of employees affected. This list represents the latest guidance provided to CNN by federal agencies. Some of the numbers could change as agencies identify ways to divert funding from other projects to keep their workers employed. You can also sort each column or search for specific information, such as “FCC” or “defense.”  See the long list for yourself @ CNN.com and see what you think.

Due to Congress’s failure to pass legislation to fund the government, We the People has been temporarily disabled.

As a result, you will be unable to create or sign We the People petitions. Once government funding has been restored, We the People will be re-enabled. Petitions that were open as of October 1, 2013 will have their deadlines extended.

Updates regarding government operating status and resumption of normal operations can be found at USA.GOV.

That above statement is actually from the https://petitions.whitehouse.gov/ page which re-directs you to http://www.whitehouse.gov/we-the-people-temporarily-disabled page. How do I know this? I was actually looking for a specific petition for something I was going to attempt to write which I felt worth sharing. That story to come here in the very near future. I just thought I would share this information as I found it kind of entertaining with this partial government shutdown and all. This crap just amazes me. Why not shut down Whitehouse webpages. I bet the Whitehouse still has WiFi though, just a thought. 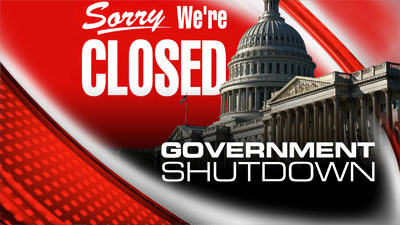 I know everyone out there has been hearing about the shutdown and here is a look at how a shutdown will work, which parts of the government will close, and which parts of the economy might be affected. So, lets look at what services are going to be affected by the government shutdown as of 01 October 2013. This is only a partial list with short descriptions of each area affected. If you would like more information then I highly recommend doing an internet search or contact your Congressman because asking me won’t yield any more information beyond what you read here. I just thought I would share the information I have read and found with all of you. This is, of course, only about 10% of the information one can find and there is much more “commentary” to be sought out and read. Now that I have went out and read a multitude of information I can tell y’all that I’m real disappointed in our Government and the games they play. Everything the Government does affects you and I at some level or another. Based on that alone it makes me wonder why the American people are treated like dirt when the Government can’t play well together. I hold no political party near and dear to my heart and don’t write this post with a slant towards or away from any particular side. I write this post as an American citizen, a taxpayer, and a father. My concerns go beyond either side wanting to take their toys and go home, my concerns are here because stupid shit like this make us as a country vulnerable and really makes us look stupid in the world’s eye. I know what the world thinks of the United States of America means very little to most people, but I still care.

Parts of the information gathered and re-used here today came from The Guardian and was used without their permission. Other parts of information were gathered and re-used today here from the Washington Post and was used without their permission. The pictures were borrowed from the internet using a Google search. As far as everything else, well, I guess that all belongs to yours truly.