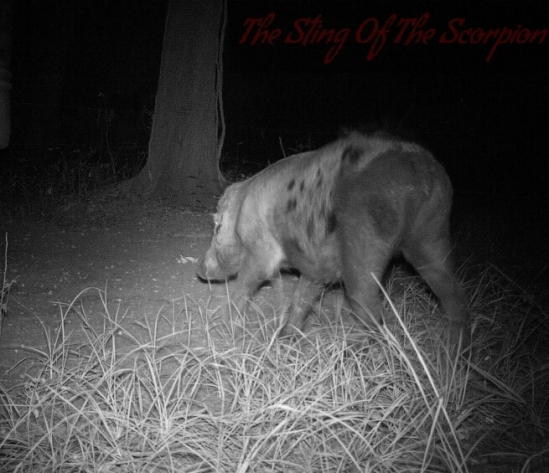 Have you ever sought something so elusive that the mere fact it is so elusive begins to make you wonder what in the hell you were looking for in the first place? Well, this situation is half right for my situation because I know what I am tracking, I just don’t know where its hiding. Seems every spring for the last nine years or so the wild hogs come up from the river and into the woods on my property. I started hearing them a few weeks ago and upon investigation I found where at least one of them had recently been. I have yet to spot one with my own eyes, but I know they are there because I can hear them. Problem solved, I put up a couple outdoor cameras where there was evidence of their presence. This tactic finally paid off and I caught one on camera. Analyzing the picture reveals this female just gave birth or is going to soon. Which is a greater reason that it doesn’t need to be here, I don’t mean it needs to be dead, just not here tearing the damn place up. The actual plan is to catch her and any others and relocate them up the river quite a ways.

Over the years I have been able to catch them and successfully relocate them. However, a few rather large hogs (over 300 lbs) have met their demise which directly resulted in them literally being smoked. Damn they tasted great too. I am good with either result which presents itself. I will be sure to post an update, but for now I need to catch this elusive little bitch, and fast.

I went out yesterday afternoon to the back of my property to get the memory cards out of my two trail cams that are back there. It was also a time for me to replace the batteries since they were going on being a month old. I usually grab the memory cards about once a week, but then it just depends on how much activity is going on back there. I have them set on on my path facing each other about 50 yards apart. There is one set just before the drop off to go down to the creek which faces the house and the other is up the path facing down towards the creek itself. The picture above is from the camera facing back up the trail towards my house. The light is actually on the corner of my shop. Now, as mentioned, I download all the pictures about once a week and then review what has been captured on film. I do this for two specific reasons in case you were wondering.

The first reason is because my property backs up to a creek and there is no fence back there. The easiest path up the bank and onto my property is to use the trail I cut through the trees. Since there is no fence I just like to know if people or coming up onto the property and perhaps find out why. Since it is about 3 1/2 acres of wooded land I get plenty of wildlife traveling through my property. Which is the second reason for the trail cams because I like to know what is moving and what is stalking what. I had an issue with a small group of wild hogs when I first built my house here. These days pretty much all I see is all the big deer and small critters moving around. Yes I am a hunter. No I don’t bait them in. I don’t hunt on my property. I could during bow season since I live out in the county but I never wanted to because I like having all the deer around. We like to watch them basically all year long. So, that is the background of why I have the cameras out. Usually I don’t get anything to special, usually I don’t find anything real alarming. But this picture was different, there is just something not right, and I needed to find out what it was. My son spotted it immediately, my daughter doesn’t see anything, my wife isn’t sure what she is seeing, which is exactly where I stand. I see it, but I can’t explain it.

Now, you are probably wondering what I am talking about so I will try to guide and explain it to you as best as I can. If you focus at pretty much dead center of the photo you will see the base of a tree. Still with me? Now look to the immediate left of that tree and what you see is blackness. In reality you I should be looking at the lights in the distance that run the circumference of my deck. But, what we can see in just the blackness of whatever is blocking that opening. Are y’all asking what could be blocking that opening yet? Me too. Where I live there are not too many options. So, let us explore that short list. It could be a tree limb. But when I went out the next day in the light there was nothing there. It could have been an extremely large deer, but there were no signs of a deer. It’s leaf litter on top of the grass so I didn’t see any tracks of any kind. There were no droppings of any kind either. The rest of the critters or animals around here are relatively small in their mass, animals like rabbits, squirrels, opossums, raccoons, and such. A wild pig would have been bigger, but still not big enough to fill in that void which is about four foot wide and seven foot tall, give or take some but not much.

As y’all can see, it really has me puzzled. I’m a firm believer that everything has an explanation and I think this is going to bug me before I can dismiss it. Plus, I don’t scare real easy but in the recent days I have made sure to have a flash light with me when I go down to the back. I think the most bizarre thing about this picture is what is missing. Usually, and by that I mean, there are usually many things visible in the pictures. In almost every image I have from back by the creek there are always things like eye glow from the critters or bugs flying that get caught in time by the flash. Neither are visible in this image. Where are all the critters and night life? Were they scared off by something? It’s really hard to understand. Hopefully I get an answer real soon because this will absolutely drive me nuts. In the mean time I have planted three more cross angle trail cams, so each trail cam has another trail cam focused on the same area just at a different angle. I’m not paranoid, I just want a secondary confirmation if anything like this happens again. Maybe it won’t happen again since this is the first time in over four years. If any of y’all figure it out or have a reasonable idea please don’t hesitate to pass that on to me. I won’t hold my breath tho, I know my property, along withs it’s ebb and flow, so I think this will all just be called a play in the lighting from the actual flash. But, since the trail cam is motion activated it still leaves me wondering what tripped it off into taking a picture.