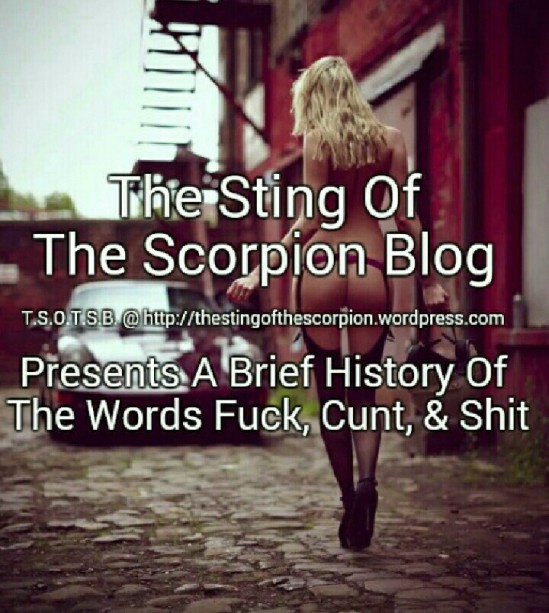 As always, members of The Scorpion Army are up early finding things which normally would go unseen or unread. Today’s presentation briefly delves deep into the history of Fuck, Shit, and Cunt, three of my favorite four-letter words that have an intriguing and very fascinating history. Rather than being written in manuscripts by monks, we find them used by normal people and preserved in surprising places like place names, personal names, and animal names and they reveal more about our medieval past than just attitudes towards sex and body parts.

Fuck isn’t thought to have existed in English before the fifteenth century and possibly arrived later from German or Dutch. In fact, the Oxford English Dictionary says it wasn’t used until 1500. Using place names though, we can trace it back a bit earlier.

Many early instances of fuck were actually used to mean “to strike” rather than being anything to do with actual fucking. The more common Middle English word for sex wasswive, which has developed nicely into the Modern English word swivel, as in: go swivel on it. Some of the earliest instances of fuck then, turn out to mean “hitting” or “striking,” such as Simon Fuckebotere (recorded in 1290), who was disappointingly probably in the milk industry, hitting butter rather than doing anything else with it, or Henry Fuckebeggar (1286/7) who may have, unfortunately, hit the poor.

The earliest examples of fuck in English appear in place names. The first is found near Sherwood in 1287: Ric Wyndfuk and Ric Wyndfuck de Wodehous. These both feature a kestrel known as the Windfucker which, we must assume, went at the wind. The next definite example comes from Bristol 1373 in Fockynggroue, which may have been named for a grove where couples went for some quiet alone time.

Like fuck, shit has a rich history, being used across the Germanic and Scandinavian languages, making it one of our oldest words. It originally had a technical usage, meaning diarrhoea in cattle, and it crops up in lots of place names from a time when people were herding cattle and naming things, such as Schitebroc—now Skidbrook—which literally means “shit-stream,” found in the Domesday Book for Lincolnshire.

Shit did not just happen in the countryside though. Street-names, for example, reflect the grotty state of urban living in graphic detail. Schiteburne Lane—now Sherbourn Lane in London—means “shit-stream lane,” and Schiteburg Lane in Romford uses borough in the middle, meaning a fortress, to paint a vivid picture of a privy, standing proud as a mockery of a palace in the middle of town.

This too is an old word, appearing across the Germanic and Scandinavian languages, although any connection to the Latin cunnusis unlikely, despite the apparent similarity. Originally, rather than being a taboo word, it was the general descriptive term for the vagina. Cunt is, etymologically, more feminist than vagina, which is dependent on the penis for its definition, coming from the Latin for “sword sheath.”

Records of cunt start comparatively early. There’s a runic inscription which reads ‘kunt,’ but that was probably a spelling mistake. Nearly all of the early evidence comes from place names and even personal names—pity, or perhaps applaud, Bele Wydecunthe in 1328, for example.

The most famous of the place names is Gropecunt Lane which at one point appeared in twenty places, generally describing—with pleasing matter-of-factness—a red light district. These have all since been lost, or have been changed to Grape Lane, but all are still easily traced.

But other place names are no less revealing.

Shavecuntewelle in Kent in 1275, for example, could describe a nearby valley with a narrow wooded area—a literal lady-garden, if you will—or it could be a site where women were punished. Cuntewellewang in Lincolnshire (1317) seems to describe a similar type of landscape.

And the thirteenth-century Hardecunt? Who knows, it’s just a great name.

Perhaps the most glorious example of cunt in a place name is Hungery Cunt, found in a 1750 military map of Kinross-shire, Scotland. Disappointingly, though, this is probably just a mistake: a misreading of Hungeremout.

These early instances of now heavily taboo words open up the world of normal people in medieval England and a different—and more vibrant—picture of the history of our language. They allow us to meet a very literal and pragmatic people with a healthy sense of humour about their bodies and their environment.