Okay, so I have been job hunting, looking for something to actually utilize what I know this time. Yesterday I go to an interview for a job, salary unknown, with a company which actually took an interest in my full resume. Little did I know that when I arrived the interview word get seriously sidetracked to say the least. Instead of discussing the job I actually applied for I was asked many questions about my, now expired, class A CDL. Then, I was told that I would be offered $30.00 an hour along with as many hours of overtime allowed by law at time and a half I could handle. Here’s the kicker, the potential employer wishes to pay everything associated with getting my CDL active. Really? Yes really, and yes I have a written offer explaining the offer.

What’s the catch? Why did I let it expire a year or so ago? Federal laws changed, making it impossible for an insulin dependent diabetic to hold an interstate CDL of any class. Well, at the time I didn’t have a use for it, so I didn’t attempt switching to a non-insulin injectable product. Come to find out, I can renew it, but here’s the catch, it has to have a rrestriction added to it, changing it to an intrastate CDL, meaning it is only good in the state it is issued and cannot be used to go state to state legally. After discussing this with the potential employer today I was pleased to be informed that the restrictions will not change the terms of the offer. Bonus!

So y’all are probably wondering if I accepted the offer yet. That answer is no, I asked to have until Monday to give him my decision. Why? I need to think about it, I need to talk more with my wife, and I don’t want to commit to something on the spot because there are things to consider. Like? The company does not offer benefits of any sort, no medical, dental, vision, 401k, and so forth. Not a particular problem for me, because I’m covered through the VA, but my wife has the very expensive burden of providing coverage for our family, dental and vision only for me,  since I was laid off. As you can see, there are things to consider first. A plus is the money, do the math, that’s grossing over $60k annually plus the overtime. As well, I will be home every night. We just need to figure out if the money outweighs the benefits shortcomings. I guess I will let y’all know in Monday or so. 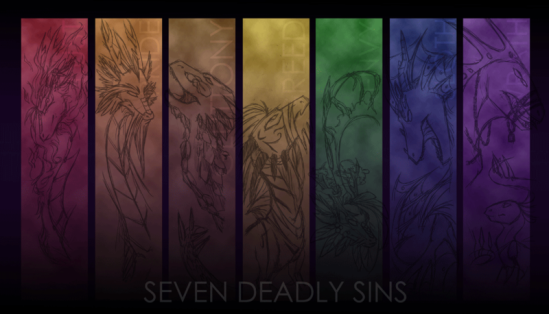 The seven deadly sins are the sins to which we as humans are most susceptible because of our fallen human nature. They are the tendencies that cause us to commit all other sins.  They are called “deadly” because, if we engage in them willingly, they deprive us of sanctifying grace, the life of God in our souls. The Seven Deadly Sins have been in existence since man’s exile from paradise. Ever since the days of Adam of Eve, we encounter seven deadly sins. These seven deadly sins make a definite borderline between what is good and what is bad. All stories in Bible mention each of these sins which result in death and Hell. These stories educate and instruct followers about man’s tendency to sin. Pride, Envy, Gluttony, Lust, Anger, Greed and Sloth are the major sins. These sins represent the opposition to the seven major virtues, which each person should possess from the point of view of Christianity. They are accordingly opposed to the seven primary virtues of Humility, Love, Faith, Self-Control, Kindness, Generosity, and Zeal.

So, my big question will be is it possible for any man, woman, or child to live their life to the fullest without Pride, Envy, Gluttony, Lust, Anger, Greed and Sloth. I may not agree with the Bible but I do know this little tidbit, based on the writings found inside it, and that is that the sinister places described within are very descriptive, very colorful, and very ruthless. Again, as it is written, Christians are forced to fear being alive and just living their lives. Doesn’t seem like a fair way to live one’s life if you ask me. Can y’all imagine if the authors of the New Testament were around today? Could y’all imagine the horror movies they would be capable of writing? My own observations of the Bible are like this, IT is full of drama, horror, death, doom, “sin”, adventure, and fantasy. I repeated get told not to take the Bible literally because it isn’t written literally. Final question, then I’m done. If I’m not to take the Bible as literal does this mean it’s not a biography, that it’s not historical, and not factual? Seems to be the case, therefore, in my eyes, it remains some of the best fictional writing known to mankind.